I knew that after waiting for nearly 20 years, today was going to be something special and I was not disappointed.   I did not sleep much during the night, still suffering from the effects of jet-lag but probably more to do with the excitement and anticipation that today would bring.

Following a full breakfast served at 05:30 we set about the daily ritual that we would be performing over the next 7 weeks – bags packed and loaded onto the support truck, tyres pumped and checked for cuts and damage and then finally ‘signing on’ for the days ride.   However, as this was the first day of tour what followed will remain with me for the rest of my life.   It is difficult to describe but we were all asked to huddle around the back of the truck and place our hands on someone else’s shoulder.   Tracy then gave the most inspirational speech I have ever witnessed talking about how we were all so brave to take on this challenge and that we would ride to Boston together, side by side with our fellow riders.   By the time she had finished I doubt that there were many dry eyes, I for one had tears running down my cheeks as this meant so much to me.   After a rousing cry of ‘Boston’ we mounted our bikes and formed up behind our escort vehicle to Manhattan Beach.

From our hotel to Manhattan Beach was a ride of about 5 miles, escorted front and rear by our support vehicles and with people on the streets cheering us and cars honking their horns.   Throughout the ride I had to fight back tears on several occasions because at last, here I was, fulfilling my dream.   We arrived at Manhattan Beach, removed our shoes and carried our bikes to the shoreline and placed our wheels in the Pacific Ocean.   For me, it was one of those moments in life that will remain with me for ever.   After several photographs we walked back up the beach knowing that we would repeat this amazing experience in just 7 weeks time, this time on the other side of the country at the Atlantic Ocean.   We paused for a few minutes for a team photo before mounting our bikes again and heading east. 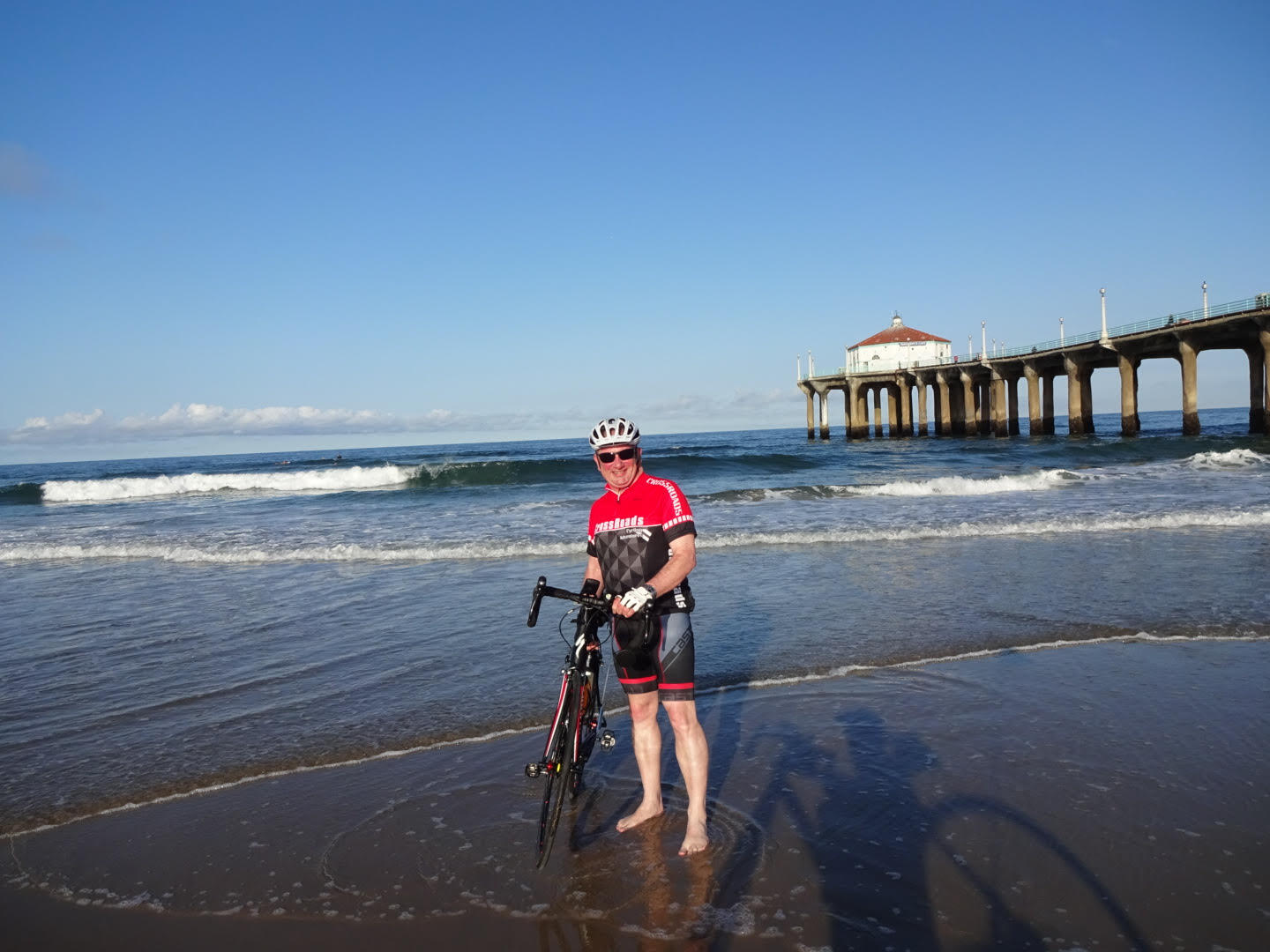 We had been warned that the climb away from the beach was steep, but with the adrenalin pumping the hill posed little problem.   The next 23.2 miles were spent finding our way out of Los Angeles.   I tagged along with a small group of riders following Jan, one of the CrossRoads team who knew the way, thereby allowing me time to focus on riding on the opposite side of the road and dealing with the America traffic.   At mile 28.2 we arrived at our first SAG and after a short stop to refuel we moved on, continuing to ride out of the suburbs of Los Angeles.

For the next few miles I teamed up with Kevin T, another UK rider and together we found our way to the second SAG of the day at mile 54.9.   This stop was at the top of a short climb on the Santa Ana Bike Trail and by the time we reached the SAG the temperature had risen significantly.   The last 23 miles of the day were a slog, but the final 10 miles were quite pleasant as we were now on quieter roads and rode in a small group, including Rik, the CrossRoads mechanic who brought up the rear.   Rik was complimentary of our progress and commented that this was the earliest he had ever arrived at the Courtyard Marriott hotel in Riverside.

With the first day of riding complete it was good to finally be on the road after several days hanging around in Los Angeles.   The next few days were going to be tough so nearly everyone retired for an early night.