On the road again today after yesterday’s rest day in Bandon and what a day it was.  We awoke to heavy rain showers and the forecast did not look good for the rest of the day.  A few riders decided to leave early hoping that they would miss the worst of the weather whilst others hung around the motel looking for a suitable dry spell to at least start the ride with.

Roy and I left just a few minutes to 09:00 in a brief interlude in the downpours and with a faint hint of some blue sky coming in from the south.  We only just made it outside of Bandon before it started to rain and rain it did.  We had decided to cycle straight to Gold Beach on the US101 thus avoiding all of the little detours which added about 4 miles to the overall days mileage.  It was a wet and miserable first hour or so and after 16 miles we pulled into a little cafe at the side of the road for refreshment in Langlois.  We were shortly joined by Dave who I found out comes from Gillingham in Kent and knows Chatham very well where my grandparents used to live.

As we left the cafe Chris, Kate and Iona came up behind us and I suggested to Roy that we try to work with them to make a small train.  It lasted for several miles but Roy was still having issues with his ribs so we slackened off and rode our own pace for the remainder of the ride.  We stopped again at Port Orford for another coffee and cake.  By this time we were drenched and before too long I began to get cold.

We headed off for the final 27 miles and I took the opportunity to climb quickly up the hills and then wait for Roy at the top. This plan warmed me up again and it also enabled me to take a few photo”s whilst waiting for Roy to catch me up. Roy is 74 years old and a very strong cyclist and if he was feeling 100% he would ride me into the ground.  However, we are both comfortable riding at the pace we are currently riding and enjoy each other’s company on the road.

The final few miles were hard work with a strong headwind. We took it in turns to ride in front whilst the other sheltered behind. We even had to pedal downhill at one point the wind was so strong. As we crossed the bridge over the Rogue river that signalled our arrival into Gold Beach the heavens opened and the final couple of miles were cycled in monsoon conditions.

We eventually arrived at the hotel like two drowned rats shortly after 15:00.  We grabbed a coffee from the lobby and then I decided it was best to wash my bike down before having a nice hot shower which warmed me up a treat.  Tonight, Roy, Nick, Eric and I ate at the restaurant attached to the hotel.

We were glad to get today over with, it was not the most enjoyable experience although on the latter part of the ride there was some nice coastal scenery.  Tomorrow is another day and our last in Oregon, so we are all hoping that as we cross over into California the sun will start to shine upon us. 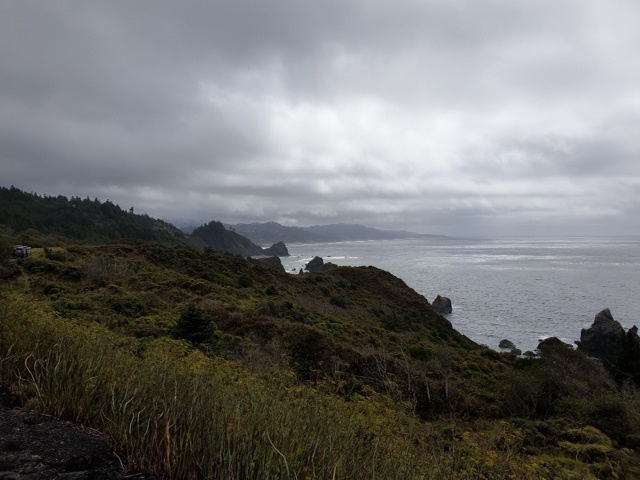 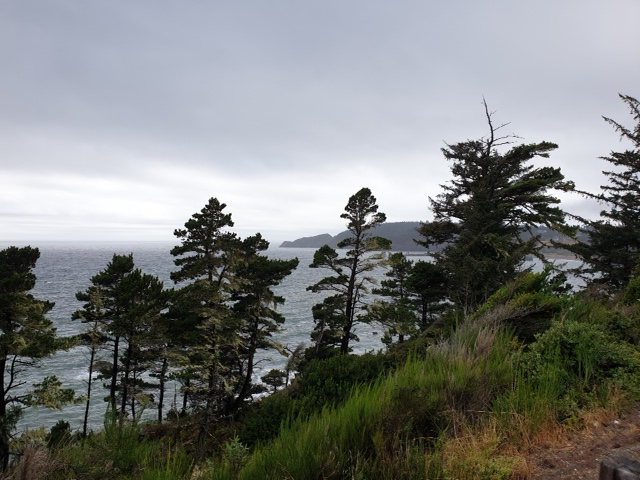 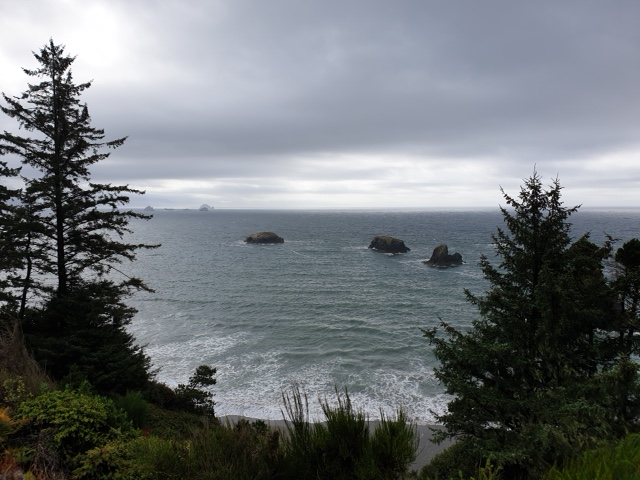